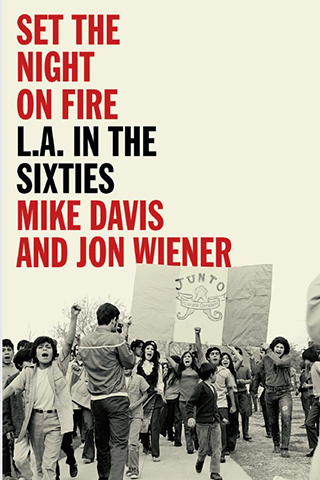 Order at Amazon Order at Verso

“A vital primer in resistance, a gift to the future from the past.” – The Guardian

“An indispensable portrait of an unexplored chapter in history” – Publishers’ Weekly

“A monumental history of rebellion and resistance” — LA Review of Books

Histories of the sixties in the United States invariably overlook Southern California, but Los Angeles was the epicenter of that decade’s political and social earthquake. L.A. was a launchpad for Black Power—where Malcolm X and Angela Davis first came to prominence and the Watts uprising shook the nation. The city was home to the Chicano Blowouts and Chicano Moratorium, as well as being the birthplace of “Asian American” as a political identity, a locus of the antiwar movement, gay liberation movement, and women’s movement, and, of course, the capital of California counterculture.

Mike Davis and Jon Wiener provide the first comprehensive movement history of L.A. in the sixties, drawing on extensive archival research and dozens of interviews with principal figures, as well as the authors’ storied personal histories as activists. Following on from Davis’s award-winning L.A. history, City of Quartz, Set the Night on Fire is a historical tour de force, delivered in scintillating and fiercely beautiful prose.