Listen HERE
The pandemic has slowed the speed of life under capitalism, Naomi Klein suggests in her recent conversation with Katrina vanden Heuvel—and that has created greater empathy and solidarity, expressed in the unprecedented support for the Movement for Black Lives. But the “Screen New Deal”—the virtual classroom and workplace—are bringing greater isolation and increasing corporate power.
Also: Trump’s rushing to develop a vaccine and declare victory over Covid-19 just before the November election – whether or not the current research, “Operation Warp Speed,” has succeeded. Gregg Gonsalves explains the challenges to the researchers, and the dangers posed by Trump: an ineffective vaccine that will create more resistance and skepticism about future vaccines. Gregg teaches epidemiology at Yale School of Public Health. He’s also the winner of a MacArthur genius fellowship.
Plus Ella Taylor talks about the new film “Boy’s State” – it’s about 1100 teenage boys in Texas brought together by the American Legion to organize a state government. And no, it’s not a horror movie – it’s a documentary.
Finally, Your Minnesota Moment: Ilhan Omar defeats a well-funded opponent.  8-13-20

Listen HERE
We’ve been told many times that Trump won the 2016 election because his populist appeal won the white working class. Populism is the problem, in this view — populism mobilized the irrationality, bigotry, & authoritarianism of the white working class. Tom Frank say that’s all wrong — he wrote the classic “What’s the Matter with Kansas?,” and now he has a new book out: “The People, NO: A Brief History of anti-Populism.”
And Ella Taylor reviews “A Thousand Cuts,” a documentary about fascism in the Phillipines – where the regime of President Rodriguez Duterte has killed 30,000 people, claiming they were drug dealers – and drug users.  It’s on PBS Frontline.
Also: Mike Davis talks about LA in the Sixties –the huge nonviolent direct action campaign for integrated housing that came before Watts. The defeat of that campaign, in a statewide referendum, was one of the things that made the Watts rebellion, 55 years go this month, inevitable.  8-6-2020

Listen HERE
The Feds vs the Protests in Portland: David Cole, National Legal Director of the ACLU, explains what’s at stake there.  He also proposes one way to reduce police misconduct: reduce enforcement of misdemeanors, which account for 16 million arrests annually.
And Ella Taylor reviews a documentary on the ACLU’s legal battles of the past few years–the fight for immigrant rights, voting rights, abortion rights and LGBTQ rights.
Also, Mike Davis talks about LA in the Sixties –the fight in those years against the LAPD and for black lives continues today.  7/30/2020 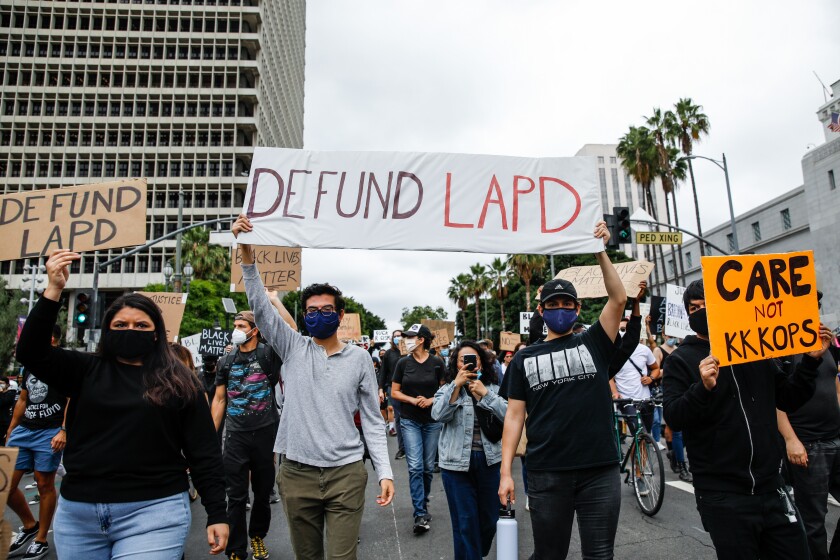 Listen HERE
Black Lives Matter-L.A. says “defund the LAPD.” And the sherriffs, and the school police. Kelly Lytle Hernandez explains – she teaches history at UCLA, and she’s the recipient of a MacArthur ‘Genius” grant.
Also: Black Lives Matter protests are everywhere, including some fo the most unlikely places: Zoe Carpenter reports on what’s been happening in Laramie, Wyoming; Florence, Alabama; and even Vidor, Texas—it’s a former Ku Klux Klan haven that Texas Monthly described as the state’s “most hate-filled town.”
Plus: another episode of “The Children’s Hour,” stories about Ivanka, Jared, Don Junior, and Little Eric, with Amy Wilentz. This week Ivanka gets in trouble for wearing a mask – and Don Junior’s girlfriend tests positive.
And Ella Taylor talks about the new Netflix series “Stateless,” about a refugee detention camp in Australia, created by and starring Kate Blanchett—and also about “The Old Guard,” starring Charlize Theron, it’s the first superhero movie directed by an African-American woman, Gina Prince-Bythewood.  7-16-2020

Listen HERE
The US accounts for 4 per cent of the world’s population, but 25 per cent of the people who have come down with COVID-19 and 25 percent of those who’ve died from it. How did the richest country in the world –that spends the most on health care–become the sickest? Harold Meyerson comments.
Also: in our ‘news you can use’ segment, Ella Taylor talks about the new L.A. noir detective show, “Perry Mason”–and about the wonderful HBO series “My Brilliant Friend,” about two girls growing up poor in Naples in the Fifties.
Also later in this hour: Black Lives Matter, and Sandra Bland’s was one of them. This week is the fifth anniversary of the death of Sandra Bland in a Texas jail—July 13, 2015. What happened to Sandra Bland? To understand that, you have to begin way before she died. Debbie Nathan reports on the life, as well as the death, of Sandra Bland.  7-9-2020

Listen HERE
As new cases of Covid-19 continue to climb, the price of the drug Remsidivir, which helps reduce hospital stays, was announced: $3,120. Cost to Gilead Pharmaceuticals of production: $10. David Dayen talks about Biden how could cut the price–he’s executive editor of The American Prospect, and writes the daily “Desanitized” blog.
Also: UC Irvine law prof Michelle Goodwin talks about her experience of racism in Minneapolis.
And film critic Ella Taylor discusses “Babylon Berlin,” the German series set against the rise of fascism in Germany in 1929, and Kore-Eda’s new film “The Truth,” starring Catherine Deneuve. 7/2/2020

Listen HERE
The Trump campaign said that a million people had requested tickets but the Tulsa arena seated only 17,000, so, they set up a big stage outside for the overflow, but only 6,200 people showed up. Is Trump’s base turning away from him, at last? Harold Meyerson of The American Prospect comments.
Also:: UCLA Historian Robin Kelley on the Police vs. the People — and the many communities that continue to suffer under police violence.
Plus: News you can use: film critic Ella Taylor on films about bad cops: especially “LA Confidential” and “Serpico.” 6/18/2020

Listen HERE
Today’s number one topic is the people and the police. The Democrats have unveiled a new law to reform police everywhere. Jody Armour, professor of Law at USC, comments — his new book is “N*GGA THEORY: RACE, LANGUAGE, UNEQUAL JUSTICE and the LAW” forthcoming in August.
Next up: Ivanka Watch — after using pepper balls and flash bang grenades to clear demonstrators for Trump’s bible photo-op, the White House said that it was Ivanka’s idea — Amy Wilentz reports.
Plus, We can’t go to the movie theaters but we can stream them at home. Spike Lee’s new film “Da Five Bloods” is out now — film critic Ella Taylor comments. 6-18-2020

Listen HERE
“The best thing about the protests during the last few weeks is that they are NOT about Donald Trump,” says Dahlia Lithwick, “they are about us.” She writes about courts and the law for Slate and she hosts the podcast “Amicus”.
Next up: Protests against police violence have been met with more police violence — and Democratic mayors in deep-blue states have failed to stop them — Elie Mystal comments.
Plus: The Criterion Collection has taken down its paywall for a series of films by black filmmakers — Ella Taylor has news you can use with criterion, virus-time TV watching. 6/11/2020